This amazing dice game was sent in by Freddy Porges.

If you want to see the official rules, click here.

Objective: The object of the game is to score 100 points exactly. If you roll over 100 points, you go down to 77 points.

Gameplay: Each turn, a player will roll a set of four (4) dice three (3) times to attempt to score points.

Scoring: You score points by having pairs, triples, or quadruples of the same number on your third and final roll. For example: if the below were the player’s third roll, they would net 12 points (4 x 3 = 12): 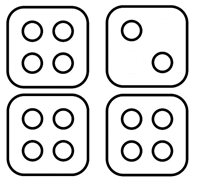 After your first roll, you can choose to leave certain dice on the table or pick them all up for your next roll. You may only pick up dice that are unmatched or all of the matched dice. For instance, if you rolled the above example (three 4’s and one 2) on your first roll, your options for your second roll are:

Additionally, you are not permitted to touch any dice unless you intend to pick them up for your next roll. In the above example, if you accidentally touch one of the 4’s, you must now pick up all 4’s.

If you roll snake eyes (two 1’s) at any point on your three rolls, your turn is over and you net zero points. 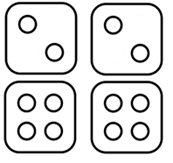 If you roll a quadruple (also called four-of-a-kind) of any number on any of your three rolls, your turn is over and you net the value of those dice plus a bonus if you so choose. You can always elect to not take your bonus and instead net the mathematical result of the four dice if that is a better outcome for your score. The quadruple bonus exists to incentivize players to roll for lower numbers. Here is the bonus structure:

When one player gets to 100 points exactly, all other players receive one last “rebuttal” round to either attempt to tie the winner at 100 points or score as many points as they can to not end the game in last place. Triple snakes game players may decide to enforce a “loser punishment” for the player who ends the game in last place. See drinking rules for the recommended drinking game loser punishment.

If multiple players are tied after the rebuttal round, (either at 100 or any other number), they continue in a “roll-off” until one of the players scores a higher point total. The first person to reach the initial tied score decides the order of the “roll-off”. Note, if two players are tied for last place after the rebuttal, they still cannot score beyond 100 points in their “roll-off” or they will return to 77.

Triple snakes was invented as a drinking game. Here are all the drinking rules:

The objective of the game is the same, score 100 points exactly. After one player wins and the rebuttal round is complete, the player with the lowest score must take a shot (or any other loser punishment players agree upon before the game).

If any player rolls a triple snakes (three 1’s and namesake of the game), it is a “social” drink, meaning all players must take a drink.

If any player rolls a quadruple (also called four-of-a-kind), it is a “social” drink, meaning all players must take a drink.

If you net zero points on your turn, you must take a drink. This could be from getting snake eyes, failing to net points after electing to complete a straight, or just not matching any dice on your third and final roll.

If you net a point total that puts you over 100 points, you go to 77 points and you must take a drink.

You can use a pad and paper to keep score or download the “Keep Score Gamekeeper” App. The score-keeper is responsible for alerting the game-players when players are tied or when there is a lead change. They should also give regular score updates every few rounds starting after the third round.

It is usually better to be on an even number than on an odd one. Keep this in mind when electing whether or not to take a quadruple bonus or when you go above 100 points and are down to 77.

Don’t worry about starting off slow, it’s easier than you think to catch up!

It is impossible to win the game from 89, 93, or 97 without rolling a triple snakes (three 1’s). Sometimes it might be better to purposely go over 100 and restart at 77, but fortune favors the bold…