Our Fortnite Drinking Game focuses on the battle royale portion of the game. For those unaware this game is free to play on pc, playstation or xbox. So there’s really no reason not to grab it and try out this drinking game!

The battle royale mode was pretty shamelessly stolen from Player Unknown’s Battlegrounds but it does at it’s own unique gameplay mechanics. Player’s are simply dropped into a 100 person world and try to be the last one alive as the map slowly shrinks. It gets increasingly tense every minute so it goes great with a few beers.

Fortnite for any platform and drinks

Players will be drinking for their placement in a battle royale match. As well as drinking for each subsequent player death after they die and the camera follows other players.

Players can either take turns or play in teams for this drinking game. But they must make sure to watch the entire game after you die. When players die the camera follows who killed them, and so on, until the game is over.

When a player dies he drinks based on the following chart

If the game is played in teams then the number is extrapolated. So if it’s teams of 2 then there will only be 50 teams so double your placement number at the ending to make it out of 100.

On top of all that, once you die you must drink every time the new player your watching dies until the game is over. So you must finish watching the game after you die.

The Fortnite drinking game is a very fun way to spend your night. This game is one of the funner ones to watch because you never know when the player will get picked off. It can be pretty steady drinking especially if you happen to land right next to someone and get last place. If you liked this game check out our giant collection of video game drinking games! 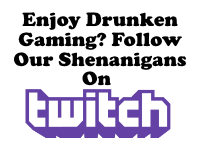